Santorini Holiday Transfers provides a basic Santorini Tourist Guide to inform you about island culture and its villages.

Just above the crater of Santorini volcano, the islands of Palea, Nea Kameni and Thirassia emerge. Fira, the capital of the island, is built on top of the steep rocks creating a unique setting.
The new port of Santorini, Athinios is located just below Fira. You can climb from the traditional stairs or use the picturesque mules, which are a unique experience!
Of course, there is a road that leads to Fira to drive by car as well as the magnificent cable car that makes the route Athinios – Fira.

The Cultural Center at the Venetian Mansion of Gyzi, which hosts cultural events, painting exhibitions, theatrical performances, musical events, etc. There is also a permanent exhibition with old maps and documents on Santorini and the rest of the Cyclades. The Bellonio Cultural Center, the Orthodox and the Catholic Church also contribute to the development of culture. On the way to Exo Yialos beach, there is the Emmanouil Lignos Folkloric Museum with remarkable exhibits and a representation of a traditional Santorini house, the Archaeological Museum of Fira. Do not miss to visit the seabed of Santorini for enjoy the caldera. 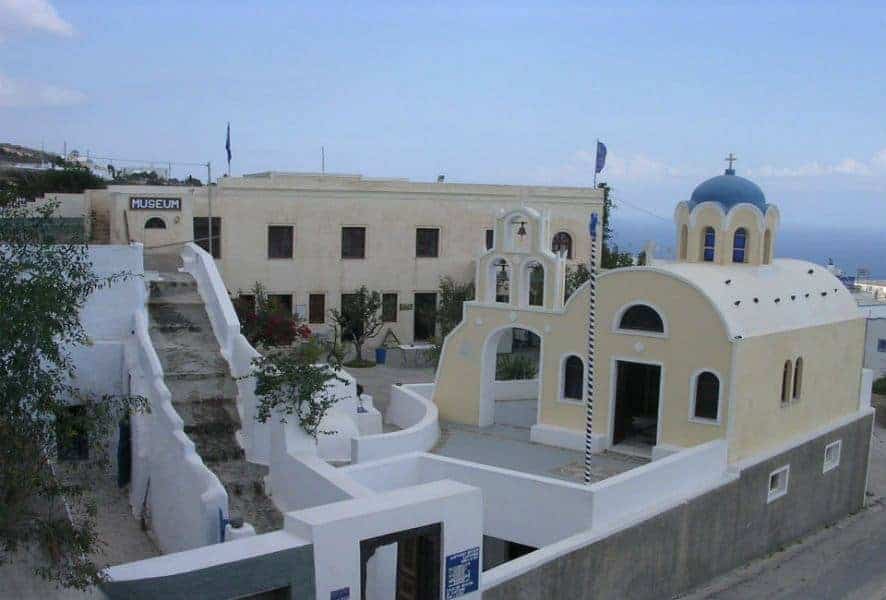 Akrotiri is one of the most remarkable archaeological sites of Greece, discovered in the excavations of the archaeological team of Spyros Marinatos in 1967. From the excavations was found an entire prehistoric settlement, which was first inhabited around 3000 BC. noting significant growth during the Middle Cycladic era. The terrible eruption of the Santorini volcano around 1500 BC destroyed the city and buried it under the lava and ash. The explosion was so strong that the tidal wave it caused reached Crete and destroyed its cities, signaling the end of the Minoan civilization.

Perissa is a beautiful village, 11 km from Fira. Its Cycladic architecture with the very narrow alleys adds a special character to the village, and it also has an amazing beach.

Imerovigli is built on the highest point of the rocks, 300 meters, on the road between Fira and Oia, offering the most impressive view of the island. Traditional alleys and churches make this beautiful settlement so unique that it can be classified as a preservable. Imerovigli is just one kilometer from Firostefani, the last neighborhood of Fira.

Kamari is a tourist center with a long beach that is world-wide for the black pebbles. It is a new settlement with many restaurants, hotels, rooms to let and a few orchards on the outskirts. It is 10 km away. From Fira.

Megalohori is 6 km away from Fira, is the first village to meet. Traditionally it preserves the architecture of neoclassical houses, narrow streets and cobbled streets.

Messaria is a village built in the middle of the island, 3.5 km from Fira. Its special feature is the vines that surround it. There is also a winery that produces excellent wines.

Monolithos is a settlement located near the island’s airport and has a stunning beach.

In Oia – built on rocks of 350 meters – thousands of visitors from Greece and from all over the world arrive each summer to enjoy the unique moments of sunset when the sun sinks into the waters of the Aegean, creating rare colors in the atmosphere.

From Pirgos, which is 7.5 km away, From Fira, you literally have all the Santorini at your feet. It is a large village, built on the slope of Prophet Elias, on the highest point of the island. It is an imposing settlement, which until 1800 was the capital of the island. At the top of the hill is Kastelli, a settlement with a wonderful view.

For your stay in Santorini, you can book a room in one of the hotels or rooms to let. In Fira, Oia and other areas of Santorini, there are hotels, hostels, rooms to let, furnished apartments and studios of various categories and types that can satisfy the demands of the guests for a pleasant stay. You will find wonderful hotels, hostels and well-appointed rooms for rent, of all categories and with varying prices.

The transfer was easy to schedule and the drivers were very professional! This company is top notch!

The drivers were friendly & I will book with them again, as well as highly recommend to friends! Kudos! & Thanks!

We have used Santorini Holiday Transfers for over 3 years and have found them to be an extremely reliable, customer focused company. We would certainly recommend them.

Santorini Holiday Transfers was on time helped us with the luggage, well mannered driver!